Man behind the curtain: Do elites deserve more privacy than the rest of us? 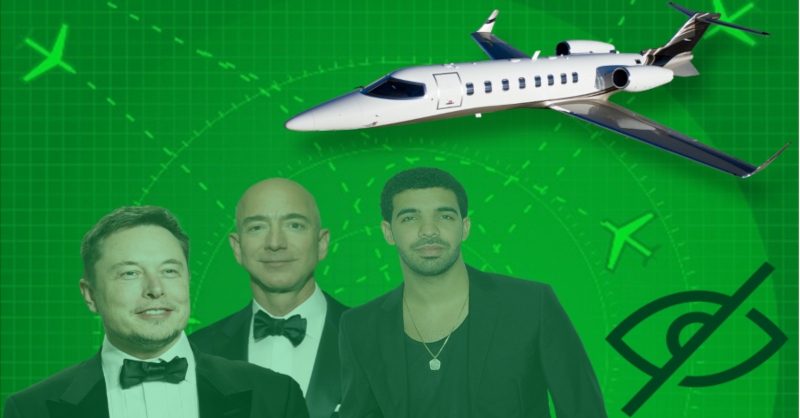 Jack Sweeney, a 19 year old college student from Florida, has stirred controversy by using open source information to track the locations of aircraft belonging to the global super rich. Sweeny set up a twitter account managed by an automated 'bot' which used code to tweet the location of a private airplane owned by Elon Musk, the world's richest man.

Musk offered Sweeney $5,000 to stop tweeting this information, citing it as a security risk. Sweeney haggled about the price, before being blocked by Musk and ultimately deciding to turn his project into a cryptocurrency subscription service platform, dealing specifically with aircraft belonging to celebrities. Hey, it’s a peasant eat billionaire kind of world out there right now.

How and why are flights tracked?

Aircraft are required under US FAA regulations to file flight plans and in many cases, to carry active transponders which identify them. In civilian airspace and outside of combat zones, even military aircraft are tracked by civilian and military flight radars. This information is aggregated, including the positions and flight paths of various aircraft which is correlated to their flight "tail numbers". This allows them to be tracked on maps, which are then published so that people are able to identify aircraft they see, in a vast database which is widely used by international aviation enthusiasts.

Flight tracking services such as flightradar24 or flightaware offer this information to subscribers. Such services are an integral tool for governments, corporations, investigators and journalists.

This information can be used for safety in navigation, allowing pilots to forsee intersecting flight-paths or to monitor the airspace above or near a destination airfield. The information also allows family members to know the position of a loved ones’ flight, or supply chain managers to understand when a shipment will arrive by air. It is essential public data.

During the 2021 fall of the Afghan government, journalists used such services to track evacuation flights. Conflict researchers have also recently used these services to monitor weapons shipments to Ukraine.

Jack Sweeney isn’t taking the information his twitter bots are publishing from any closed, confidential or classified sources. Nor is rebroadcasting this information a violation of any known law. Unless it has been classified or ruled to be confidential, no information is itself ‘illegal’.

Sweeney runs several bots monitoring aircraft used by Elon Musk, Jeff Bezos and the Canadian performance artist Drake. Information about the whereabouts of Musk or Bezos’ private plane creates a layer of corporate accountability where the movements of these magnates can be observed in real time.

What can we learn about the flight patterns of billionaires? This information could be of interest to anti-corruption researchers, corporate policy experts, corporate competitors or even activists hoping to stage lawful demonstrations against the worlds’ richest men.

Aaron Swartz he is perhaps not, but this kind of activity is the bread and butter of both information activism and journalism. People with an interest in these fields would do well to monitor this conversation and maintain a degree of skeptical opposition to any lobbying effort by the world’s richest man to exempt his flights from such tracking.

As the world’s richest people, it is important that public policy reflect that there is nothing, beyond their wealth, which makes these persons different from any other. They are rich, not special.

With the exception of public officials and military personnel during a crisis, the movements of powerful or wealthy people are not and should never be, protected as secrets, nor are they vital to national security. In fact, the US government has recently claimed in response to far right criticisms over “secret flights” for immigrants, that there is ‘no such thing as secret flights.’ Elon Musk has the rights of any other citizen and should not be allowed to run his own unlisted or off-book flights.

Perhaps a specific concern of Musk’s might be privacy concerns stemming from an incident in which the US FAA ‘accidentally’ disclosed 2,000 flight records from a handful of aircraft belonging to the late sex trafficker Jeffrey Epstein.

Arguing that he should not be tracked, reinforces the perspective of the global super-rich who, from taxation to privacy see themselves as above the laws and regulations of nation states, a separate class of humanity. This separation should never be allowed to be enshrined in legislation.

Musk’s electronically sophisticated cars have multiple on-board tracking systems themselves. For $10 a month a Tesla owner can use sentry mode to turn their car into a remote surveillance camera. Musk is filling near-earth orbit with satellites to broadcast internet to the world, satellites which interfere with other information gathering projects by the public and public agencies. It is not beyond the realm of possibility that starlink satellites could be used to selectively obscure things from the view of amateur earthbound astronomers, for example, the looting of a $700,000 Quadrillion asteroid, the birthright of humanity.

Without even considering risks like the corporate surveillance of information transmitted over global satellite internet networks, Starlink, by design does unambiguously threaten the public’s right to know.

In fact, his desire to travel beyond the bounds of human and governmental scrutiny, to the fringes of the universe hints at a certain obsession with not being monitored, tracked or held accountable, or at the very least, creating his own set of rules.

Another one of Sweeney’s targets, Jeff Bezos, was previously the CEO of corporate giant Amazon. Amazon produces the wildly popular “Ring” doorbell, the most ubiquitious piece of corporate surveillance technology on the planet, accessible to many US police departments.

The 2013 Ridley Scott film ‘The East’, starring Elliot Page and Alexander Skarsgard follows a group of off-grid environmental anarchists terrorizing the super rich by holding them to account. One line in that film, “You spy on us? We’ll spy on you.” seems appropriate in this situation. It appears for the moment that Jack Sweeney is doing that.

Why, while the super-rich erode privacy for the general public, are we even discussing whether they should themselves be elevated in a way that prevents us from gazing back at them? Pay no attention to the man behind the curtain? Way to keep them on their toes, Jack.