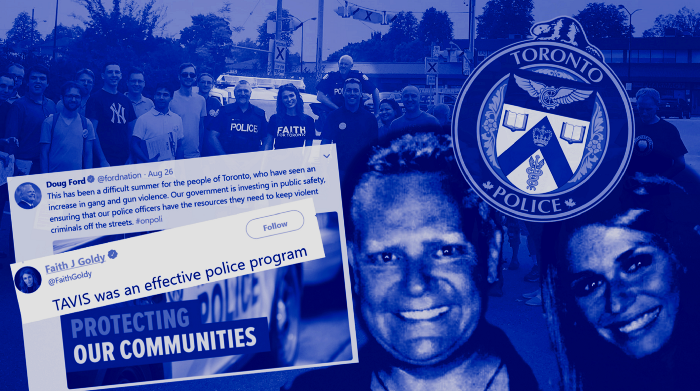 The Toronto Police Service is defending two TPS members who posed with their uniforms and vehicles for a group photo with a far-right mayoral candidate known for espousing pro-police, white nationalist and neo-Nazi talking points. “We get asked countless times a day to pose for photos with members of the public and that’s what they were doing.” said Mark Pugash, Director of Corporate Communications for TPS. “This was just a job.”

On August 27, 2018 two members of TPS were featured in a photo tweeted from the account of fringe mayoral candidate Faith Goldy. The photo was taken in a parking lot outside of the Byzantine Ukrainian Catholic Church of Saint Demetrius the Great in Etobicoke. Pugash explained that police were present because they were notified of a ‘credible threat to public safety’ in relation to the event.

Faith Goldy is a University of Toronto alumnus, and former recipient of the prestigious Gordon Cressy Student Leadership award. She is now a fringe mayoral candidate who is most well-known for her prior work as a pundit with the far-right media outlet The Rebel.media.

Goldy, who has frequently participated in violent far-right demonstrations, announced her candidacy a year after being fired by The Rebel. That termination is widely believed to have occurred in response to her guest appearance on a neo-Nazi podcast and comments she made around the deadly protests in Charlottesville, North Carolina. A YouTube video shows Goldy proudly using the ’14 Words’ a slogan commonly used by Neo-Nazis and white supremacists.

Goldy’s mayoral platform includes a call to reinstate the TPS ‘guns and gangs’ (TAVIS) task force, an increase to police funding, a reinstatement of the controversial carding practice and the forced eviction of refugees from community housing. Her campaign’s slogan is ‘Make Toronto Safe Again’.

The reinstatement of TAVIS and the practices of carding are platforms shared with current premier Doug Ford. Goldy and Ford have been pictured together at events. Ford also used a variation or allusion to the ’14 words’ in his June 7, 2018 victory speech. The Goldy campaign event took place in Premier Ford’s neighborhood.

The officers who responded to the event were from the Toronto Police 23 Division. Directly across the Humber River from the location where the campaign event was held is 12 Division, which had previously received funding for a TAVIS rapid response unit until that program was cancelled. In July 2018, a former TAVIS member, Investigator Mark Hayward wrote a scathing letter blaming Mayor John Tory for a rise in gun violence and telling him to “step aside.”

According to TPS, somebody from the Goldy campaign contacted them with a concern that an event they were holding in Etobicoke might be targeted by ‘violence’. Two police officers were assigned to prevent a breach of peace and were subsequently invited to participate in a photo-op with the candidate.

“They had no information who she was.” said Pugash. “We have plans for marches, significant events. We received a report of possible trouble.”

Pugash did assert that it was incorrect and harmful for Goldy to have tweeted a message which implied that police were present as supporters or volunteers.

The Police spokesperson also acknowledged there might be a potential impact for the defence in criminal cases. At least 8 anti-racist activists have been arrested at rallies opposing white nationalists over the summer of 2018. When asked whether public police involvement with white nationalists might complicate criminal proceedings he said, “I’d expect defence lawyers to use any argument they might make,” but offered the opinion “They would be wrong to use this in this case.”

There are echoes from a case from 2006 when the Ottawa Police Union invited candidates to declare their position on policing in the city. According to a report from CBC, a 2004 legal opinion requested by the city’s police services board determined that the political endorsements were illegal under the Police Services Act.

The board passed a policy requiring the police chief to discipline officers who endorse or oppose political candidates, and the union discontinued its endorsements. Lawyer Paul Copeland was quoted by CBC as saying that a plan to endorse candidates for mayor was “Totally illegal”.

Despite this, Pugash insisted that the officers who posed with Goldy had done nothing wrong, that they did not know who they were dealing with and were just doing a job. He also suggested that a question about training police to recognize these risks and conflicts of interests, while well intentioned, did not reflect the challenges inherent to securing events and protecting the peace.

Pugash then reacted with unabashed anger when asked whether he had any knowledge of supporters or members of white nationalist groups on the Toronto Police force, suggesting it wasn’t relevant “We don’t ask our people what their views or ideologies are.”

Evan Balgord, Executive Director of the Canadian Anti-Hate Network, an independent, nonprofit organization made up of Canada’s leading experts and researchers on hate groups and hate crimes, pointed to a ruling by the Ontario College of Teachers. In 2007, the OCT ruled in the case of current Hamilton Mayoral candidate Paul Fromm who was fired from his teaching job for far-right political activities. That ruling found Fromm’s beliefs which included holocaust denial, were “…[r]elevant because of the impact it had, and was likely to have, on the confidence of the public.” Balgord suggested that if the 2007 ruling applied to teachers it logically would apply to police as well.

A press release from the Canadian Anti-Hate network called unequivocally for action from the Toronto police service. “This sends the wrong message,” said Bernie Farber, Chair of the Canadian Anti-Hate Network. “Torontonians targeted by racist hate have every right to be concerned when police officers who are sworn to uphold the law are pictured supporting a political candidate candidate who associates herself with white supremacy. The Toronto Police Service must respond and take disciplinary action if there are grounds for it.”

Update 08/28/18: Following the publication of this story, Toronto Police tweeted this to the author.