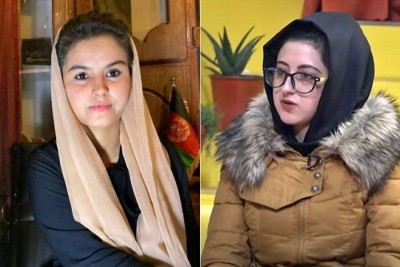 Meanwhile, the governing Taliban regime is playing host to a former Al Jazeera Journalist Charlotte Bellis, from New Zealand. Bellis is stuck in limbo which she blames on her country’s coronavirus restrictions. In the international press, she has positively contrasted the Taliban’s treatment of women against that of the New Zealand government.

A twitter statement made by Amnesty International South Asia and subsequent statements made online by the “anarchist federation of so-called Iran and Afghanistan” (Asranarshism) are calling the attentions of western human rights activists and anarchists, to the plight of two women's rights demonstrators missing in Afghanistan.

It has been reported that on January 19, 2022  Parwaneh Ibrahimkhel and Temana Zaryab Pariani were arrested at their home along with three of their sisters, for participation in what local sources are calling a peaceful demonstration against the Taliban’s treatment of women and girls.

According to Amnesty International, on the evening of January 19, following a protest, one of the women posted a video to social media stating that the Taliban were beating at the gate to her home.

A twitter statement made by the Anarchist Union of Afghanistan and Iran states that the gate was broken down and the two activists, along with with three sisters, named in the posting as Zarmineh, Shafiqa and Karimeh, were arrested. Activists believe that the women have been held in Police District 9, in Kabul.

While the Warp has been unable to confirm the reports, some Twitter users have alleged the two women have been subjected to torture. Amnesty International’s release also states that the women have allegedly been tortured. On January 29, one account cited ‘unconfirmed reports’ claiming that Parwana died in custody. This story will be updated as soon as more information is available. 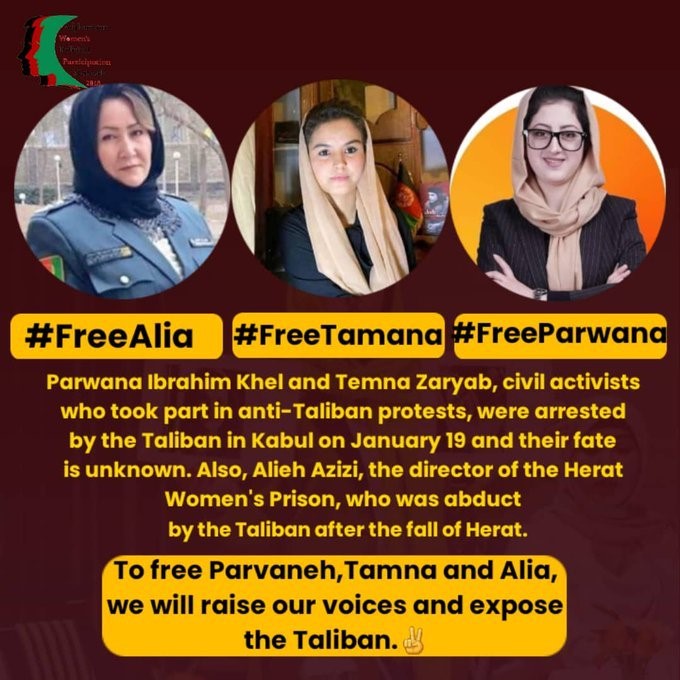 Twitter users are sharing appeals including #FreeTamana and #FreeParwana alongside an appeal to #FreeAlia. Alia Azizi was a female police official working as the manager of the women’s prison in Herat, Afghanistan and has been missing since October. She is not mentioned in the Asranarshism statement.

Twitter user Wahida Amiri, previously cited in this article about Afghan women’s protests, issued the following statement, also retweeted by Asranarshism: “By abducting Pervaneh, Temna and her three sisters, the Taliban proved to be the main enemy of the Afghan women's movement. [The] women of Afghanistan want the anarchist women of the world to support our anarchist movement!”

Some twitter users who appear to support the Taliban have spoken critically of the narrative that Tamana and Parwana are missing, citing a lack of proof and that the women staged their disappearance to cover for an international asylum claim.

Other accounts cite the story of New Zealand reporter Charlotte Bellis who declined an opportunity to return to her home country. Bellis was formerly a correspondent for the Doha, Qatr based Al Jazeera. Extramarital sex is illegal in Qatr, which ultimately necessitated that Bellis leave the country, triggering the limbo.

The Taliban’s office is in Doha and this is where peace talks with the Americans were held during the administration of United States President Donald J. Trump. Several Twitter users opposed to the Taliban have accused Charlotte Bellis of working to legitimize the Taliban regime in international media. 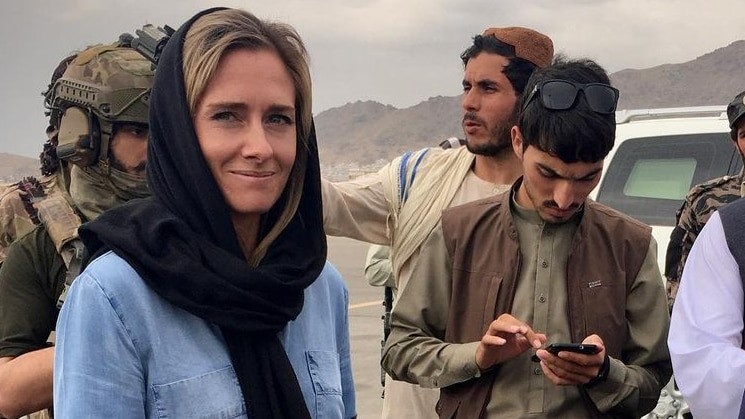 Bellis, who has said she would like to leave Afghanistan, is now stuck in administrative limbo due to New Zealand’s stringent coronavirus restrictions and has remained in Afghanistan as a guest of the Taliban, for which she credits the Taliban, saying in a column “When the Taliban offers you – a pregnant, unmarried woman – safe haven, you know your situation is messed up[.]”

Bellis preceded this by challenging the New Zealand administration of Jacinda Adern, saying it was “brutally ironic” that she had once questioned the Taliban about their treatment of women and she was now asking the same questions of her own government, a sentiment which went widely reported in English language media around the world. 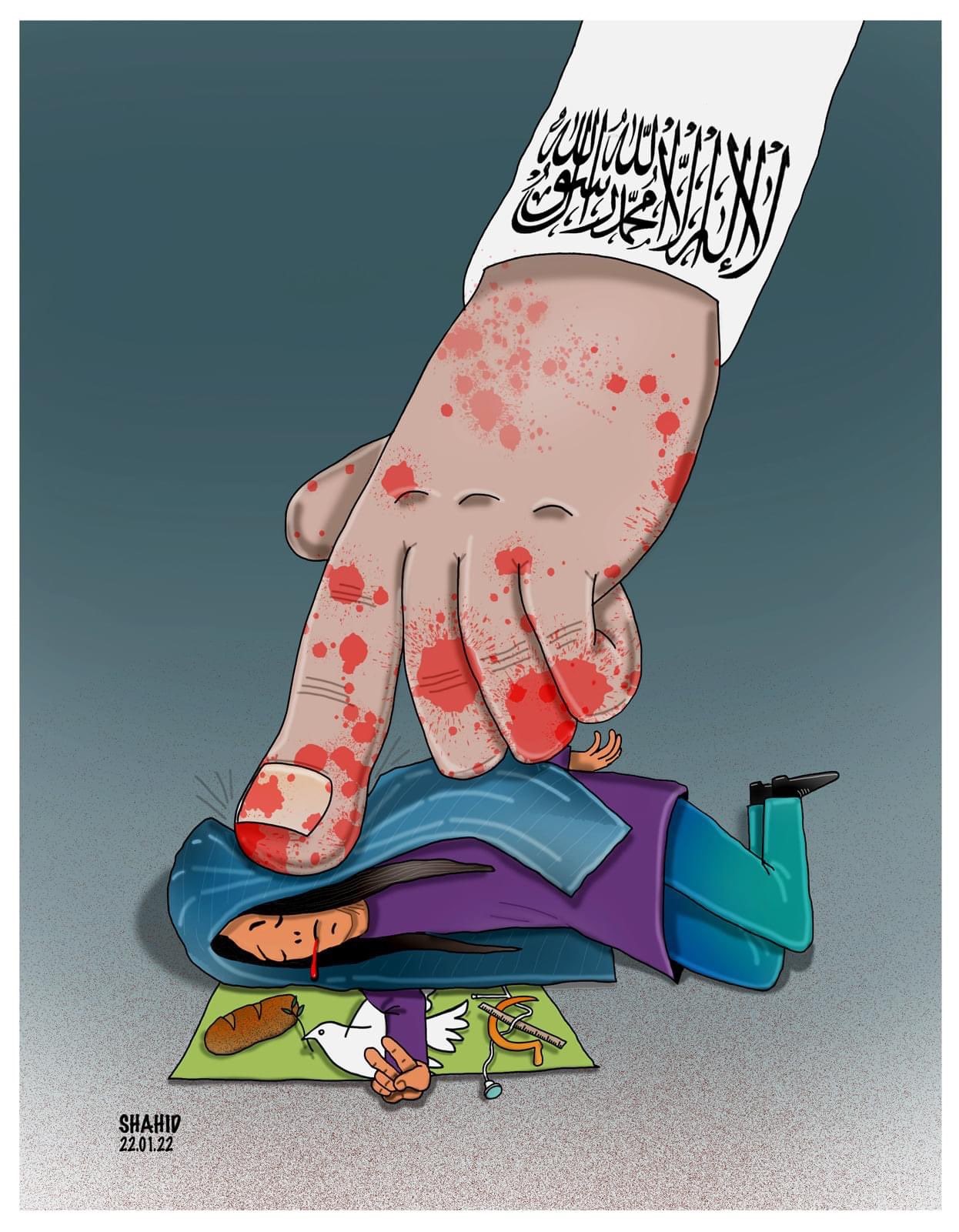 On Sunday 23 January 2022, a group of women’s rights demonstrators staged a rally in Afghanistan’s Bamiyan province, calling for the release of Tamana and Parwana 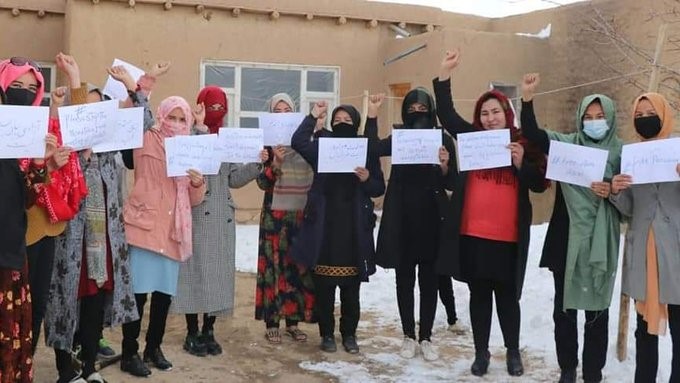 The Taliban, which just received an initial disbursement of $32million USD from the United Nations to help provide humanitarian aid and pay necessary costs in running the country, have been participating in diplomatic talks in Oslo, Norway which some say are leading toward eventual international recognition of the Islamic Emirate of Afghanistan. Those talks began on January 23.

During the talks, Hoda Khamosh, the representative of Afghan Women’s protestors, interrupted the meeting to hold up pictures of Tamana and Parwana in front of the Taliban delegation. 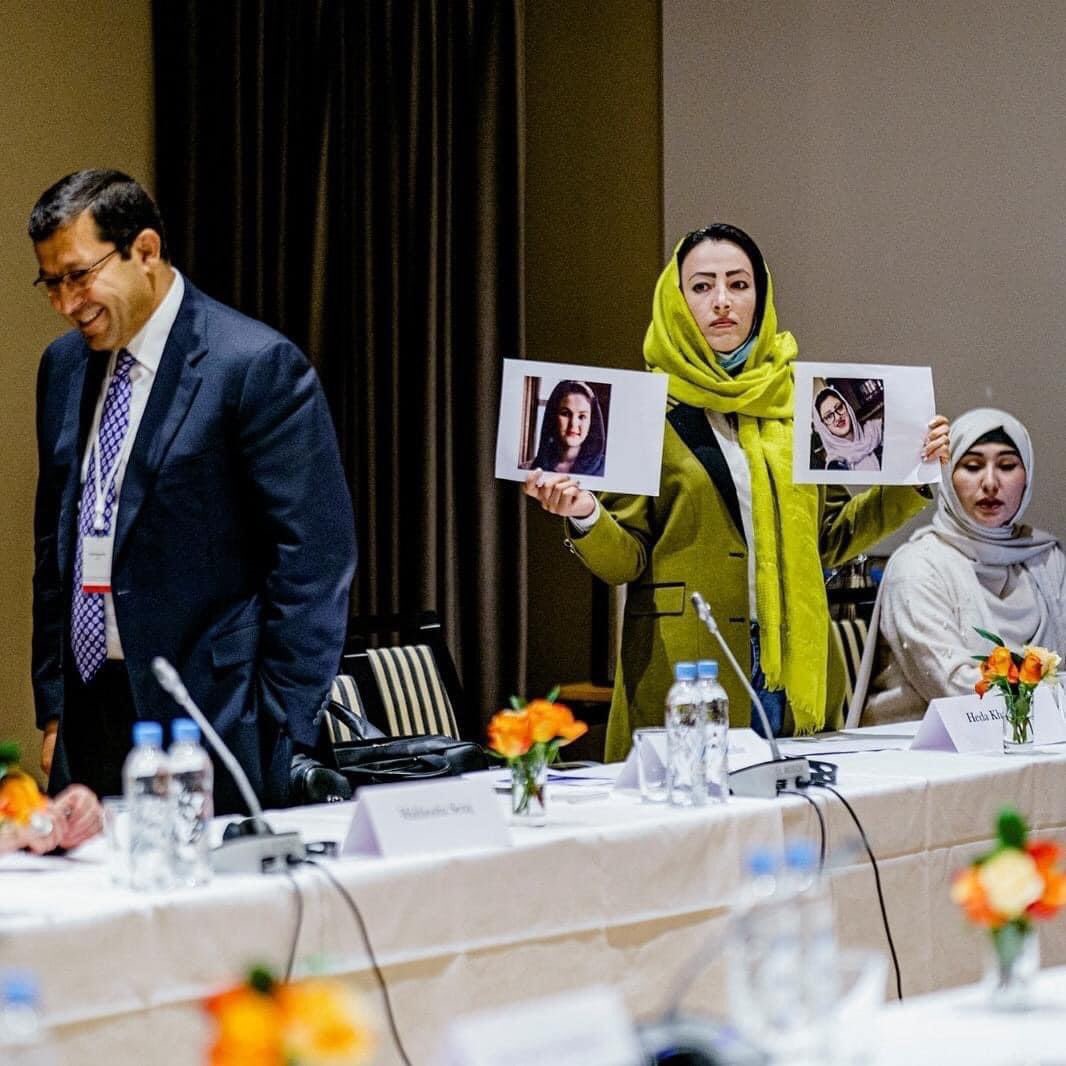 Khamosh’s Twitter account details specific incidences of repression by the Taliban toward female demonstrators and highlights the names and portraits several women who have been killed since the Taliban took over.

The Oslo talks ended inconclusively on Jan 26 with the United States and other nations stressing the need for more assurances about the status of women and girls in Afghanistan.