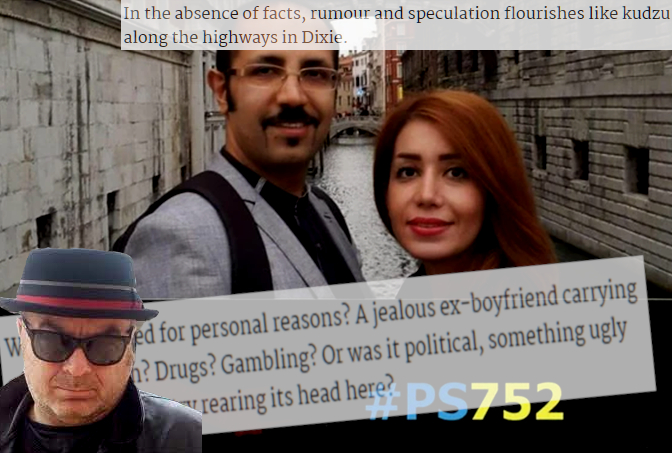 (Toronto) Brad Hunter isn’t a good journalist. He’s not even a good writer. As far as crime reporting goes, he’s got an indescribably easy job with the Toronto Sun, wafting mean-spirited and libelous conjecture into the ether like, smoke from an incense burner, or—well, like Kudzu in… Dixie?

Before we go any further, let’s unpack that strange "Kudzu in Dixie" simile for a second. Kudzu, also known as “The vine that ate the south” is an invasive species of vine from, of all places, Asia. Trust me, I know, I’m a gardener and I’ve removed the stuff. Still, it’s a very strange and obscure allusion to begin his story about a missing non-white woman with a metaphor about an all-consuming invasive species which originated in Asia, in a story which involves neither vines, nor Asia nor Dixie that mythical homeland of the white, racist soul. Well, let’s be charitable and pretend that wasn’t just a weird a dogwhistle. 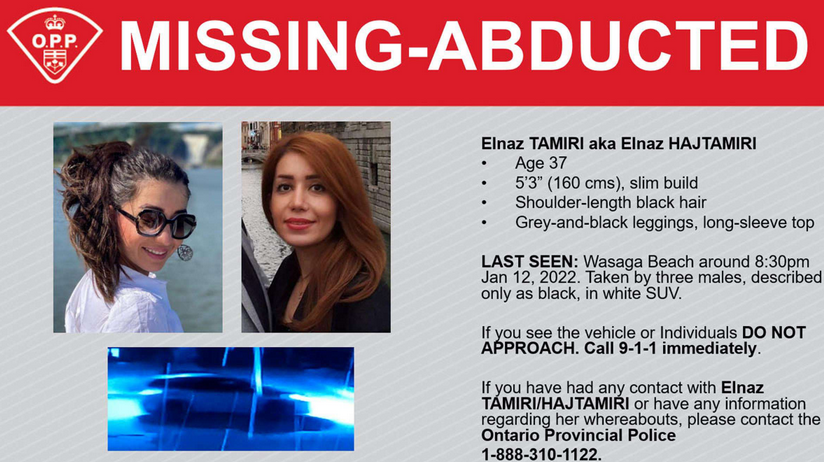 January 12 in the town of Wasaga Beach, a woman named, Elnaz Tamiri was seized from her home by what OPP have described as three black men wearing police-type gear and allegedly posing as law enforcement stated that they had a warrant for her arrest before bundling her into a white lexus.

The 37 year old was in Wasaga Beach on Trailwood Place. Trailwood Place is a street of large suburban style homes on the eastern side of town. It has been published that the home she was at belonged to relatives.

These are all the facts that are known or which have been made available by police at this time. The search for Elnaz is active, and ongoing. Bereft of a story to tell, none of this stopped Brad Hunter from making up a story of his own.

Like all good internet sleuths Brad’s first stop was Elnaz’ Facebook page. He notes that online rumours suggest a person was casing houses on the street in a white car with covered license plates. He also states that Elnaz is Iranian, that there is a man who appears in early photos on her profile. He also points out that the ‘mystery woman’ has posted photos which appear to be taken in Venice, Kuala Lumpur and China. Maybe this last “connection” he makes is why the Kudzu strangling Dixie came so readily to mind for Brad. 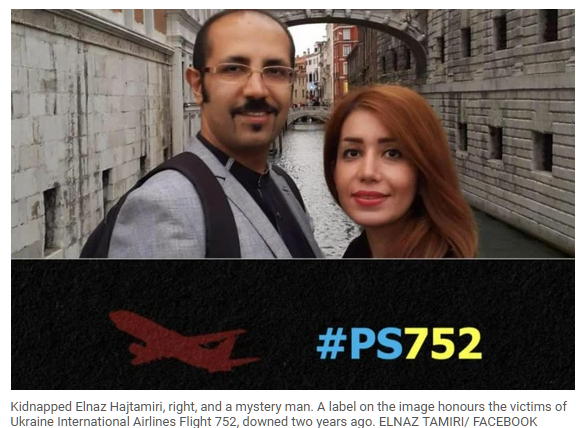 Of particular focus in Mr. Hunter’s reporting is the “Mysterious man” Elnaz is pictured with. Despite analyzing her facebook page, the Toronto Sun was unable to confirm the identity of the man in question. It took us about two minutes. His name is Farnam Shapourifar and he is the late husband of Elnaz. This is confirmed in a Farsi language publication the ‘Persian Mirror’ which is distributed in the Iranian diaspora community in Toronto. The report which purports to be a Persian Mirror exclusive is entitled “The mystery of the abduction of Elnaz Haj Tamiri in northern Toronto and the suspicious death of [her husband] in Iran.”

Farnam's facebook page, not active since 2013, shows the couple married in 2010 FARNAM SHAPOURIFAR/FACEBOOK

Further, Hunter highlights Elnaz’ use of a #PS752 ribbon on her facebook profile, an act which commemorates the 176 passengers and crew who died when the Iranian Revolutionary Gard Corps shot down a Ukrainian airline full of Iranian expats, only moments after the plane took off in Tehran. 138 of the passengers were connecting to Canada. Many members of the Iranian community in Canada knew people personally who were on that flight. Several of the victims were from the Greater Toronto Area.

Without considering that all Iranian-Canadians and Iranian residents in Canada were touched by the disaster, Hunter begs the question, in right proper journalistic style, whether Elnaz’ #PS752 tribute and the disappearance of the ‘mystery man’ from her Facebook profile is evidence that her own disappearance might be connected to the #PS752 tragedy. This is transparent, unmitigated and unabashed conspiracy theory coming from a purported crime reporter at a newspaper with national readership.

Hunter further suggests that Elnaz’ arrival at the home of relatives in Wasaga beach, after ‘recently’ leaving the home of relatives in Richmond Hill where she had been residing previously, implied she might be “hiding out.” “Why Wasaga Beach?” Hunter asks, after indicating that she had family there, not realizing he has answered his own question.

Brad Hunter asks far more questions than he answers, and makes some discriminatory assumptions based on Elnaz' country of origin as well. BRAD HUNTER/TORONTO SUN

So what actually happened to the ‘mystery man’ we now know as Farnam Shapourifar? Why did he disappear from photos on Elnaz’ Facebook? It appears that Dr. Shapourifar, born in Tehran in 1979, was a veterinarian who worked with small animals in Iran. The Persian Mirror reports that Shapourifar took sick with a ‘mysterious virus’ in 2017 and died suddenly 48 hours later, with another set of comments referencing a respiratory ailment that advanced quickly in combination with kidney failure.

The story of his death is corroborated by a memorial leaflet posted on social media by other members of the Shapourifar family in 2017. Warp.media has not been able to confirm the Persian Mirror’s story of a ‘mysterious virus’ or observed any postings corroborating this. If we identify a source, this story will be updated. A grieving Elnaz is said to have opened an elementary school in Iran, in honour of her deceased husband. After two years of a grueling global pandemic, it is a touching and sympathetic story of personal loss. Elnaz’ life has not been easy. 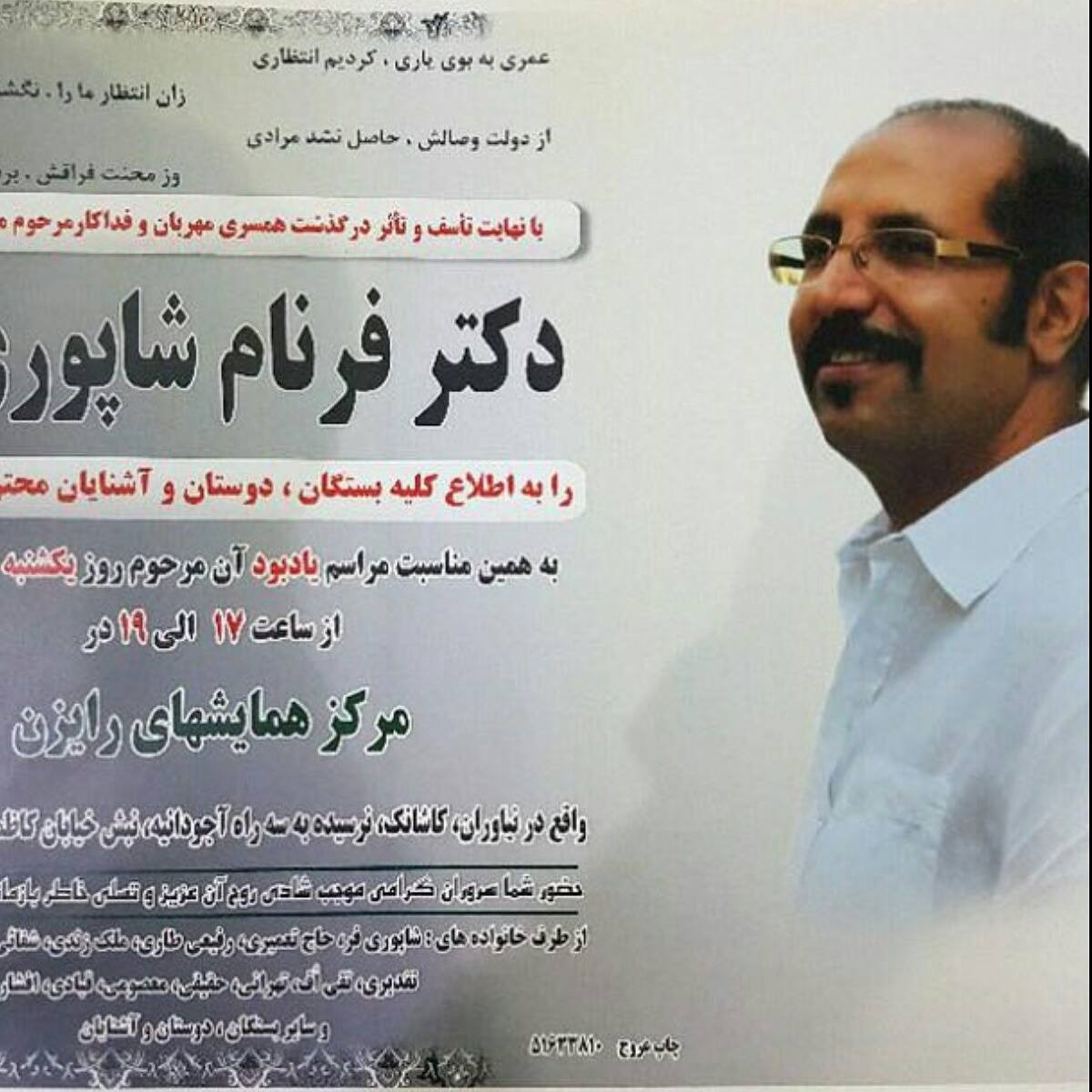 A memorial pamphlet for Mr. Shapourifar shared by his family in 2017. FACEBOOK

Whatever the circumstance behind her disappearance, these are not people worthy of half the suspicion Brad Hunter assigns to them. It would appear that to the small mind of Mr. Hunter, traveling internationally, being Iranian, caring about tragedies which affect the Iranian community, and not being immediately identifiable to Mr. Hunter upon a cursory look at a crime victim’s social media are grounds for suspicion, or proof of some further ‘mystery’ beyond the already very mysterious criminal abduction which he devotes a surprisingly small amount of his article to discussing.

That the well-traveled Iranian couple must be innately ‘mysterious’, is a specifically orientalist, Islamophobic and racist logic endemic to the Toronto Sun’s reporters who have proven time and time again a complete inability to handle such sensitive matters. In this case Brad Hunter is unable to discuss the facts of a foreign-born woman’s heinous abduction without muddying the waters in conspiracy theory or outright disinformation. Hunter’s writings allege or imply some vast conspiracy, a link to trouble “back home” or a ‘mystery’ involving Ukraine Airlines flight PS752, a collective trauma to the Iranian-Canadian community. Of course the circumstances of the non-criminal portion of the story: a dead husband and a grieving widow are much more benign. And hearkening back to his awkward introduction, still no links in this story to Kudzu or Dixie, whatever Brad meant by that.

Of course, it is to be hoped that Elnaz will soon be found in good health or rescued from her predicament, at which time, she could definitely pursue legal action against the Toronto Sun for casting racist aspersions on her name and that of her deceased husband. By publishing Brad's conjecture, the Sun have shown themselves, again, to be a ratty tabloid staffed by mean-spirited and morally-bankrupt writers who demonstrably care far more about perpetuating conspiracy theory than they do about the personal safety of a crime victim. Brad Hunter is the national crime columnist for the Toronto Sun and was previously a writer for the New York Post, a Rupert Murdoch owned tabloid which the Columbia Journalism Review has called 'a social problem-- a force for evil.' None of this is surprising.

Following the New York post's style, the Toronto Sun didn’t even do the due diligence of determining Elnaz' marital status or the identity of the male subject in their article, before they published. They cast suspicion on the victim of a crime, citing in part her country of origin. Legally discriminatory this constitutes journalistic malpractice at its best. It is an astonishing risk to take, begging the question (the only question we'll ask) of why Mr. Hunter and The Sun seem so sure they won't face legal ramifications for their irresponsible reporting? This is certainly something that Elnaz, who they are helping to victimize, will want to know, when she is found.

Until then, keep some incense burning.