The Civility War — How Trump, Milo, Incels and the NRA are Linked in the Capital Gazette attack. 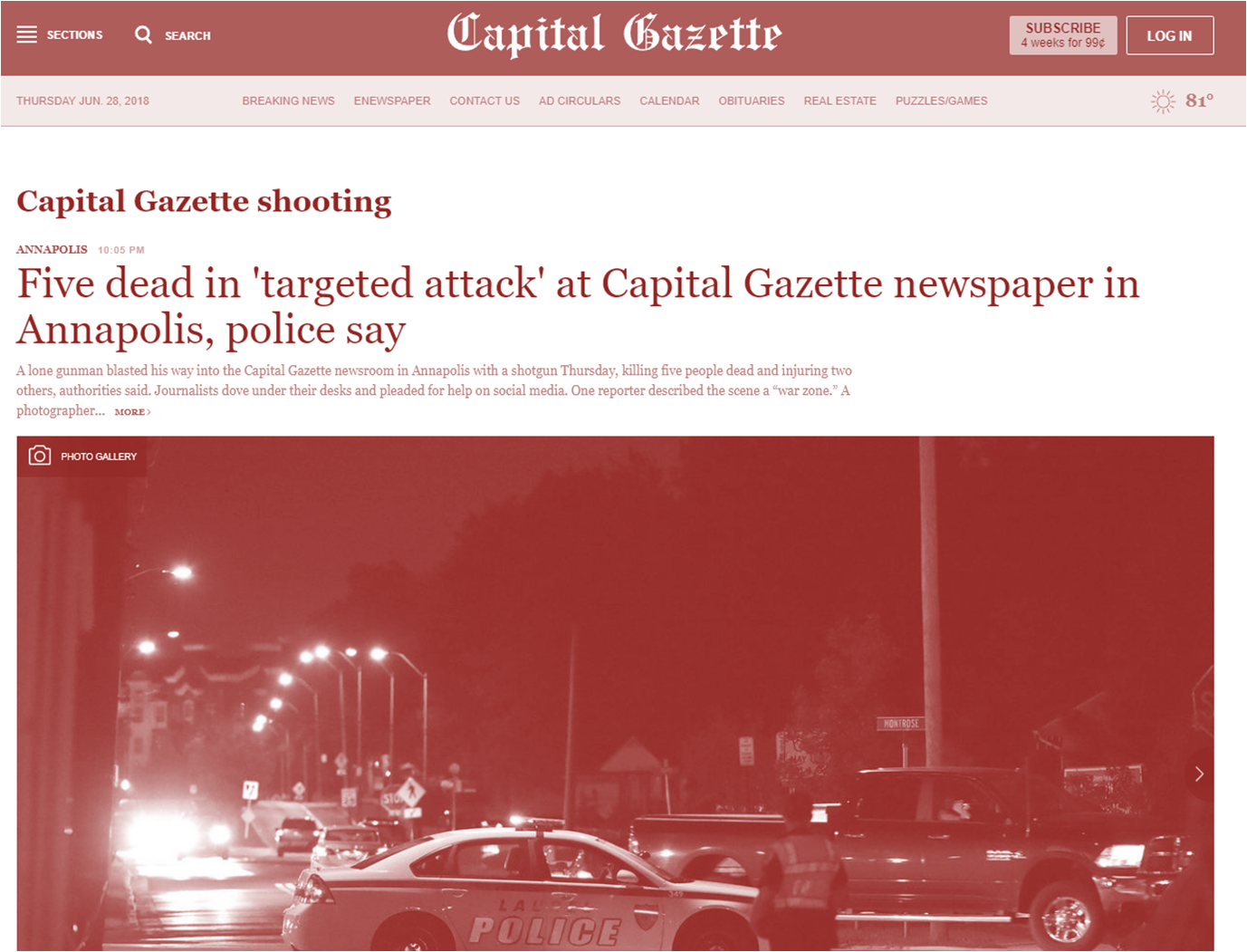 ‘He was mentally unstable’.

‘He lost a lawsuit, #soreloser’.

The spin is real in the wake of Thursday’s horrific mass murder at the offices of the Capital Gazette, a Maryland newspaper owned by the Baltimore Sun. The June 28 attack was the worst mass killing of journalists on American soil in the country’s history and represented a rock-bottom moment for democracy and freedom of the press. Still, knowing what we do about the state of American politics this horror should have come as no surprise, and from the highest office in the land to the darkest corners of the internet, there are plenty of accomplices.

At the time of this writing, the shooter can be only tangentially connected to any serious political expression or opinion. There’s no easy-answer MAGA hat shibboleth or polo-wearing torch-wielding crowd in this picture. It is known that he lost a lawsuit against the Gazette and exhibited alarming signs of personal instability. There must also be stated the clear fact that Donald Trump, the President of the United States, did not personally and knowingly order an attack on a community newspaper. It is alarming that we even need to discuss the President in those terms, or that this is open for debate. That isn’t to say that Donald Trump is blameless. Many Twitter users and journalists are of the opinion that the opposite is true.

The shooter has been identified as Jarrod Ramos, 38 of Laurel, Maryland. Ramos was embroiled in a years long legal battle with the Gazette in which he alleged that he had been defamed. The defamation was alleged to have occurred in a report by the Gazette about a harassment case in which he pled guilty. In court, Ramos did not contest the fact that he repeatedly and aggressively harassed a woman both online and offline, including placing defamatory calls to her employer trying to get her fired. He was convicted of misdemeanor criminal harassment in 2011. Ramos filed a lawsuit against the Gazette after they reported the facts of his case, but in 2015, a judge threw his suit out, stating that the Gazette had published information which was true and thus, had not defamed him.

The details of the Gazette article contained within the court’s opinion paint Ramos as an isolated and unstable individual who reached out to a woman on Facebook because she had said ‘hello’ to him years earlier in high school. Ramos began obsessively harassing her when she presumably rebuffed his entreaties or refused to provide him with emotional support. This is a recognizable pattern of behavior frequently discussed within the increasingly notorious Involuntary-celibate (Incel) movement. There’s no evidence that Ramos shared anything beyond this common worldview with the Incel community, but it is worth noting that in the aftermath of the Toronto attack, ostensibly on behalf of a larger ‘Incel rebellion’, newsrooms in Canada received online threats and increased security as a temporary precaution. His history of harassing women does place him on an ideological continuum alongside similar, more organized people who harbour a deep hatred of the free press.

In 2015, Ramos expressed hope in a tweet that U.S. President Donald Trump would sue the Capital Gazette for defamation. Again, it’s not clear from his social media footprint that Ramos was a self-styled Trump supporter, though many members of the Incel community, whose views he shares, are. The context in which Ramos mentions Trump is a tweet about a lawsuit by Trump against Spanish Language broadcaster Univision. It is safe to say that Trump’s use of lawfare was clearly something of an inspiration to Ramos in his quest to address his own grievance with the Gazette. The tweet also suggested that because a writer for the Gazette had called Trump ‘unqualified’ in an editorial piece, it might ‘end badly’ for the paper. Presumably the bad ending suggested was the hypothetical lawsuit, but the massacre at the Gazette serves as a grim footnote to this tweet.

Trump has repeatedly called the media the “enemy of the American people.” He did this as recently as two weeks before the shooting. This rhetoric has been reported widely, roundly condemned and blamed for increasing violence and political repression experienced by journalists around the world. Milo Yiannopoulis, a media scion from the early days of the Trump campaign also recently tried to desperately regain relevance with a call for journalists to be ‘gunned down’.

It shouldn’t be surprising then that Trump supporters, Incels and people on the extreme fringe of the right-wing political spectrum celebrated the Maryland attack. These are the same parts of the internet where the Toronto van attacker was likewise celebrated as a ‘new saint’.

The fact that Ramos was unstable and embroiled in a deeply personal conflict with the Capital Gazette shouldn’t surprise anybody, unstable people are always the canary in the coalmine for political extremism. They’re the first ones to heed the call, but never the last. People who believe they are at the end of their rope are the first ones to drop into darkness, presumably because they think they have nothing left to lose. Auditing the aftermath online, it is undeniable that the attack was celebrated by the people and communities on the fringe, who also comprise the self-identified vanguard of Trump’s ideology.

Courtesy of the editorial board of the Washington Post, the word ‘civility’ has entered the zeitgeist as a catch-all to describe the direction America is headed. It was intended as a ‘better angels’ type admonishment to the American left, begging them to avoid polarization. ‘Civility’ has since been adopted as an ironic concept that also neatly encapsulates Trump’s strategy of civil brinkmanship and rhetorical bombast: creating kinetic consequences, but shirking accountability for them.

Milo Yiannopoulus fended off accusations that he was responsible for the Gazette attack, stating that his call for violence against journalists was just ‘a troll’. Fed and housed on hate in the dark corners of the internet, an entire troll army comprised of angry young white men (and it is always men) is carrying out lonewolf style attacks, each for their own complex reasons, but ultimately in lockstep with a grim central purpose. It’s a kind of slow motion Reichstag fire fanned by 4chan. Politicians and pundits hide behind a veil of civility, their followers, adherents and the other far-worse angels, do not. They’re killing people. It’s a civility war.

Cranks, conspiracy theorists and the other outcasts you find in dark places are demonstrably influenced by the rhetoric of prevailing political culture. This is true even of the ones who aren’t politically sophisticated. The rhetoric of America’s political culture has been increasingly anti-woman and anti-media since November 2016. There is a reason the dystopian fiction novel The Handmaid’s Tale is increasingly relatable and screamingly popular.

While Trump did not directly order a targeted attack on the Gazette after the fashion of some transparent comic book villain, it is completely acceptable to state that he incited it and that he shares blame for it. Using the language and logic of Trumpism the Machiavellian simplicity of what is happening becomes clear. If you incite ‘losers’ to do the dirty work of destroying democracy for you, you can quickly distance yourself from them in order to absolve yourself of criminal or even political liability.

Fox News, a Trump administration mouthpiece, provided an assessment of the Gazette’s ‘political bias’ in the hours following the shooting, as though some justification for the attack could be gleaned if they discovered any disagreeable reporting. It’s that kind of coded messaging which perks the ears of future attackers “This might be more OK if it was a clearly left-leaning publication.” Will no one rid us of this turbulent priest?

This is precisely why Trump’s ongoing incitement is a major problem for democracy. It’s not the savvy and opinionated newsreader who picks up a gun and carries out an attack on a newsroom, public square or pizza restaurant. It’s the disgruntled, disaffected or disenfranchised man with a limited understanding of politics, a highly probable history of mental illness, a personal grievance and access to a suitable attack vector (a truck, van, knife, firearms and knowledge of a target) who has been allowed to feel his dark urges are somehow valid and should be acted upon. In the moment of the act he believes that force, his force, is a solution. For any number of a myriad of perceived crimes, he is willing to go to war with his countrymen. In this most recent case, the warzone was the office of the Capital Gazette and 5 journalists and media workers paid the price for what can only be described as a sickness in the soul of the man and the soul of the country.

On the topic of firearms: mass shootings are internationally recognized to be as American as apple pie, and few organizations have more culpability these horrifying incidents than the National Rifle Association ( NRA), a gun advocacy organization with strong advocates in Trump’s inner circle. The NRA has also published creepy videos threatening journalists within the last year.

While the perpetrator in Maryland is a disaffected and unstable outcast with a history of harassing women who was aggrieved over the outcome of a court battle, he had accomplices who can be named: The President who railed against the media and who Ramos fantasized would also sue the Capital Gazette for defamation. The Incel community whose views and behaviours Ramos echoed through his harassment of women and the National Rifle Association, who championed Ramos’ right to own the weapon that he used. Why was a person convicted of harassing women allowed to own a shotgun? It didn’t take a cryptic tweet from 2015 to presage that this would end badly.

On June 27, the day before the attack, Reporters without Borders (RSF) reported that 47 journalists and media workers were killed worldwide in the first half of 2018. Within one day, that annual global total of media workers killed spiked dramatically. Violence against reporters in the United States is uncommon and outright assassinations are traditionally the territory of white nationalists, criminal gangs or fully contained within the political context of specific diaspora communities.

The Capital Gazette attack is the worst mass killing of journalists and media workers on American soil and it is an abomination in a free and democratic society, but it is not a surprise. Many journalists and media experts knew and even predicted that this kind of incident was an inevitability in a heavily armed, increasingly polarized country. What is particularly disturbing though, is that this unprecedented attack was both solicited by political leaders and celebrated by their followers and is likely only the first foot across the threshold of unthinkable and uncivil darkness.

If you want to take action, please donate to CPJ who do critical work to protect press freedom and promote journalist safety internationally, or to the crowd fund for the victims of the Capital Gazette attack.