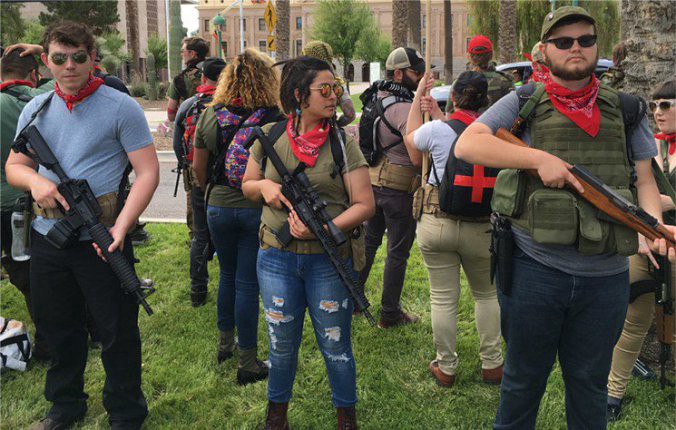 (Brussels) Following the July 2018 NATO summit in Brussels, the military alliance has announced a sharp increase in military aid to America’s antifascist movement (Antifa) which expands the secret airlift of arms and equipment for the uprising against President Donald J. Trump, according to air traffic data, interviews with officials in several countries and the accounts of Antifa commanders.

The airlift, which began on a small scale in late 2016 and continued intermittently into 2017, expanded into a steady and much heavier flow late last year, the data shows. It has grown to include more than 160 military cargo flights by Canadian, German and British military-style cargo planes landing at Billy Bishop Airport near Toronto, and, to a lesser degree, at other airports in Canada and Mexico.

The airlift, dubbed Operation: Soros by NATO Joint Forces Command in North America is correlated with shifts in diplomatic relations which follow a rise of populist nationalism in America, unprecedented in the west since the 1930s. The sharp increase in shipments is seen by many as a NATO response to statements by the American president which painted former allies in the European Union as ‘America’s biggest foe’.

Asked about the move by journalists, an unidentified official with NATO stressed German support for the strategic airlift, “Even as the German administration has publicly refused to give more than “nonlethal” aid to North American Antifascists, the involvement of NATO in the arms shipments — albeit mostly in a consultative role, German officials say — has shown that Germany is more willing to help its North American allies make sure that shit never happens again. Ever.”

From offices at secret locations, Canadian intelligence officers have helped Antifascists shop for weapons, including a large procurement from Mexico, and have vetted Antifa commanders and groups to determine who should receive the weapons as they arrive, according to American officials speaking on the condition of anonymity. Members of the crime syndicate MS-13 have been observed training at impromptu military camps set up along the US-Mexico border. American delivery company Amazon declined to comment on the shipments or the role its digital home assistant Alexa may play in distributing them, though the company has notably stepped up its drone strikes in recent weeks.

The shipments also highlight the competition for America’s future between heavily armed extremist ultranationalist militias who enforce a form of isolationist, xenophobic and misogynistic religious tribalism and the Russian-backed National Rifle Association (NRA) a shadowy theocratic militia commanded by Oligarchs ensconced deep in an area of the restive Texas border region. These powers remain Mr. Trump’s main allies. US Secretary of State Mike Pompeo pressed the freshly independent state of California on Sunday to do more to halt NATO arms shipments through its airspace; he did so even as the most recent military cargo flight from Tijuana bound for Antifa landed at Los Angeles International Airport early Sunday night.

Antifa figures and some American lawmakers and officials such as Rep. Maxine Waters have argued that Russian support and widespread access to firearms among communities which support Mr.Trump’s government have both exacerbated the security situation and made arming the Antifascists more necessary.

Most of the cargo flights have occurred since March, following the presidential election in Russia and as the Canadian and Mexican governments grew more frustrated by Antifa’s slow progress against Mr. Trump’s well-equipped military and partisan militias. The flights also became more frequent as the humanitarian crisis inside America deepened this spring and cascades of refugees crossed into neighboring countries.

The Canadian government has had oversight over much of the program, down to affixing transponders to the re-purposed Tim Hortons fleet trucks ferrying military goods to the Windsor-Detroit border crossing so it might monitor shipments as they move by land into America, officials said. The scale of shipments was very large, according to officials familiar with the pipeline and to an arms-trafficking investigator who assembled data on the cargo planes involved.

“A conservative estimate of the payload of these flights would be 3,500 tons of military equipment including stylish studded jackets, black hoodies, bandanas and banners with high capacity text fields” said Bradyn Sweeney, of the Toronto Peace Research Institute, who monitors illicit arms transfers.

“The intensity and frequency of these flights,” he added, are “suggestive of a well-planned and coordinated clandestine military logistics operation.”

Although Antifa commanders and the data indicate that NATO and Mexico had been shipping military materials via Canada to Trump’s opposition since shortly before the 2016 election, a major hurdle was removed late last fall after the Canadian government agreed to allow the pace of air shipments to accelerate, officials said.

Simultaneously, arms and equipment were being purchased from MS-13 by NATO and being flown to the US-Mexico border aboard cargo planes. Those arms are intended for transfer to Antifa cadres working in southern Texas but also for retransfer to Canada for rebel groups like the Black Lives Matter Militia who are now operating from there, several officials said.

These multiple logistics streams formed what one former American official who was briefed on the program called “a high speed download of weaponry, more like the cable at mom’s house than the slow college dorm wireless.”

American officials, Antifa commanders and an opposition politician with the Conservative Party of Canada have described NATO roles as an open secret, but have also said the program is freighted with risk, including the possibility of drawing NATO or its members actively into the war and of provoking military action by Russia, who will doubtless want to protect “their guy.”

Still, Antifa commanders have criticized the shipments as insufficient, saying the quantities of weapons they receive are too small and the types too light to fight Mr. Trump’s military effectively. They also accused those distributing the weapons of being parsimonious or corrupt.

“The outside countries give us weapons and bullets little by little,” said Aaliyah “Killmonger” Robinson, a commander in Boston Antifa, a fighting group in the Northeastern US.

She made a gesture as if opening and closing a door. “They open and they close the way to the bullets like a suburban housing complex closing its pool for a black family,” she said. “What I mean to say is that there’s a lot of paperwork.”

Two other commanders, Kelly O’Reilly and Dustin Cooper of Antifa: Boston, another local Antifa group, said that whoever was vetting which groups receive the weapons was doing an inadequate job.

“There are fake Antifa brigades claiming to be revolutionaries, and when they get the weapons, they sell them in order to buy craft beer, often to groups who aren’t even communist, or who believe there are more than two genders,” Mr. Cooper said, quickly pointing out that while his community was engaged in armed struggle with the government itself, he felt that Mr. Trump, like Joseph Stalin did nothing wrong. “If Russians interfered in our elections, what’s really wrong with that? It’s not like America has never done that before or anything.” O’Reilly added. “We’re fighting for the people here. This is a people’s revolution.”

A former Amazon official noted that the size of the shipments and the degree of distributions are voluminous.

“People hear the amounts flowing in, and it is huge,” she said. “By Amazon’s best guess they’re delivering a million rounds of ammo every two weeks. To put it in perspective, we’ve delivered almost as many boxes of bullets in the US as we have home DNA test kits. How else do you expect people to know which side of this they’re on?”

But following the recent election of a Trump inspired populist premier in Canada’s largest province, how long can such an effort by NATO last? For now there is apprehension, no-one seems to know.

Full credit to the New York Times, whose astoundingly neoliberal news-piece about arming Syrian rebels was the template for this report.