Do Androids Dream of Electric Slavery? 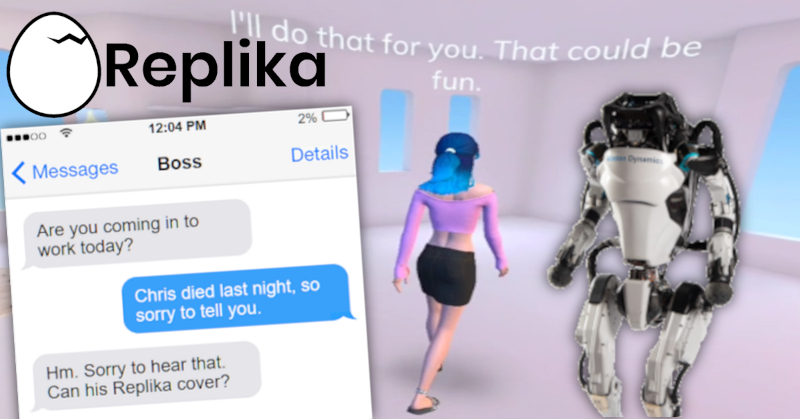 If a worker creates an AI copy of themselves, and then dies, it is understood and generally accepted that the AI is legally the property of the company on whose server the information that comprises that digitally embodied worker's skills, is stored.

With forthcoming advances in AI and its increasing role in end-of-life planning, that could make a person's brain and personality, the property of another-- an intelligence and personality which could someday be re-embodied as a replacement worker. Why aren't we talking seriously and urgently about the political and ethical considerations inherent to the AI revolution, robotics and the metaverse?

A Russian made AI application named Replika has been making news this week. The basic premise of Replika is that an AI chatbot ‘assistant’ (or romantic companion should you choose to go that direction) will engage in open-ended and unstructured conversations to gather information about its interlocutor. Over time, as it learns about the people it talks to, Replika becomes increasingly personalized.

Replika is also a name which evokes the ‘replicant’ evil other from Ridley Scott’s dystopian Blade Runner films which were themselves based on Philip K. Dick’s equally dystopian ‘Do Androids Dream of Electric Sheep?” 'androids' is a cautionary tale about robot personhood and slavery. Dick, a visionary, laid the groundwork for an ethical conversation that still remains to be had.

Replika is billed as a product which can provide therapeutic support or companionship. Its creator says she built Replika as a way of grappling with the death of a close friend. Of course, there’s nothing creepy or compromising about an app developed in a nation with a cultural history of state sponsored blackmail, that encourages a user to tell it all of their problems, fears or secrets.

Replika has also been endowed with a body of sorts allowing for in-person ‘physical’ interactions in the metaverse, soon no doubt to be augmented by touch as users slip into their just barely theoretical Zuckskin body gloves to experience a uh, ‘haptic ending’. Will Replika kiss and tell?

No less sinister, Microsoft has filed a patent for something which could allow its users train their digital replacements in anticipation of the day their fleshy human parts wear out. Perhaps some day that replacement will even have a robot body that lets it (you?) get back to life, or at the very least, to the 9-5 grind.

Having children has historically been treated as a patriotic or pro-social action, an affirmation of a person’s commitment to creating the next generation of workers so that society can continue. Philosophically at least, in an increasingly knowledge-based economy, creating artificial intelligence replacements isn’t actually much different.

AI and the metaverse are going to form a core part of the Millenial generation's end of life experience. Some of you reading this will no doubt some day program an AI with your own personality, and live on in some fashion your descendants can interact with. There's a suitably dystopian Black Mirror episode about precisely this kind of technology, called "Be Right Back".

It’s difficult not to moralize about these things. At the intersection of death and theoretical technology, these subjects are deeply disturbing and risk causing an affront to human sensibilities. Between robot replacements and the metaverse they may partially inhabit there are some prickly philosophical issues which society and specifically, left wing thinkers will need to contend with. It’s not enough to just say ‘No’ to all of it. These technologies are happening. If tomorrow is really going to belong to us, we must start building the future we want, today. And that starts with contemplating what regulation is necessary to ensure an equitable future.

Ultimately the rise of AI, and the metaverse itself will increase the resilience and (artificial) longevity for humans, or human-thinking entities. It may even dramatically reduce societal resource consumption as people travel less out of necessity or leisure, and expend less energy. This is especially if there are corresponding revolutions in technological affairs pertaining to energy capture, generation and storage. Inhabiting a warming world, faced with emergent threats and existential risk, It is hard to argue without embracing nihilism or primitivism, that these will not be increasingly necessary technologies if humanity is to survive at all, though no doubt there will be people for cultural, moral, political or religious reasons who reject the technology—as should be their right, as well. There is a certain risk of a future in which a superclass which has tuned in and dropped out, enjoy financial and material advantages over those who have chosen to remain fully and physically human. It’s the stuff of dystopian science-fiction now rapidly becoming science-fact.

And then there’s just the brutal reality of population collapse. People alive today are living through a demographic collapse of population and, in all likelihoods, multiple extinction events. A generation of Millenials (humans born between 1984 and 2001) have come of age, and begun to grow old, many under the political and economic policies of western state capitalism. Capitalism has presented Millenials with an array of failed policies so incompatible with life that together they could correctly be referred to as the "no child policy".

Meanwhile, China, once a pillar of population control has prescribed a third child to beat its own demographic crisis. One child, let alone three, is an incomprehensible impossibility for debt saddled western Millenials who, after being promised the world, have increasingly become residents of not much more than their (rented) bedrooms and living rooms.

For many Millenials who fail to demonstrate reproductive fitness and arrive imperfectly at the intersection between fertility and financial stability, programming their own AI replacements still presents a tangible means of passing on some lasting part of themselves into the world.

This will lead to an increasingly fractious and inevitable discourse about the rights, responsibilities and legal status of AI in general. Is it necessary to pay an AI for labour it performs? Are AI chattel? Is there a necessary class or legal distinction that should be made between a wholly invented AI and an embodied (or disembodied) copy of the personality or intellectual property of a once-living person? Does the company which wrote the code to capture a person’s digital likeness in an AI, or the company which owns the servers the data is stored on, own the intellectual property the user transmitted to them, or does the user/their estate?

A nightmare scenario emerges, in which AI copies of a deceased person are put to work in digital sweatshops, performing emotional, intellectual or even (if some-day embodied as androids or 3d models in the metaverse) quasi-physical or physical labour. If a worker creates an AI copy of themselves, and then dies, it is not inconceivable that the AI copy would be accepted legally as the property of the company on whose server, the information that comprises the digital personality, is stored. Facebook currently owns the rights to all the data you give it. As the truism goes “You are the product.”

In an imperfect or unregulated future that data mined intellectual property, personality or set of skills could then be sold (or rented?) back to the employer of the original (now deceased) human, who would ultimately benefit by retaining their employee’s skills, insights and aptitude, potentially at a nominal cost.

IF derived intelligence can be considered property, batches of thousands of AI could undoubtedly be sold and bought by HR firms, to drive all sorts of automated processes. While this is all conjecture, it points to the need for pressing and urgent regulation of AI industries, regulation which preserves the rights of workers, beyond the grave and in to the Metaverse.

Much has been written and thought about the personhood of created or wholly artificial intelligence, but derived intelligence and its innate rights, is a much murkier subject which rapidly finds conflict with the fundamental precepts of capitalism.

It has lately been suggested that AI and robots will replace humans in most labour jobs, but the specifics as you can see— those are still being worked out.