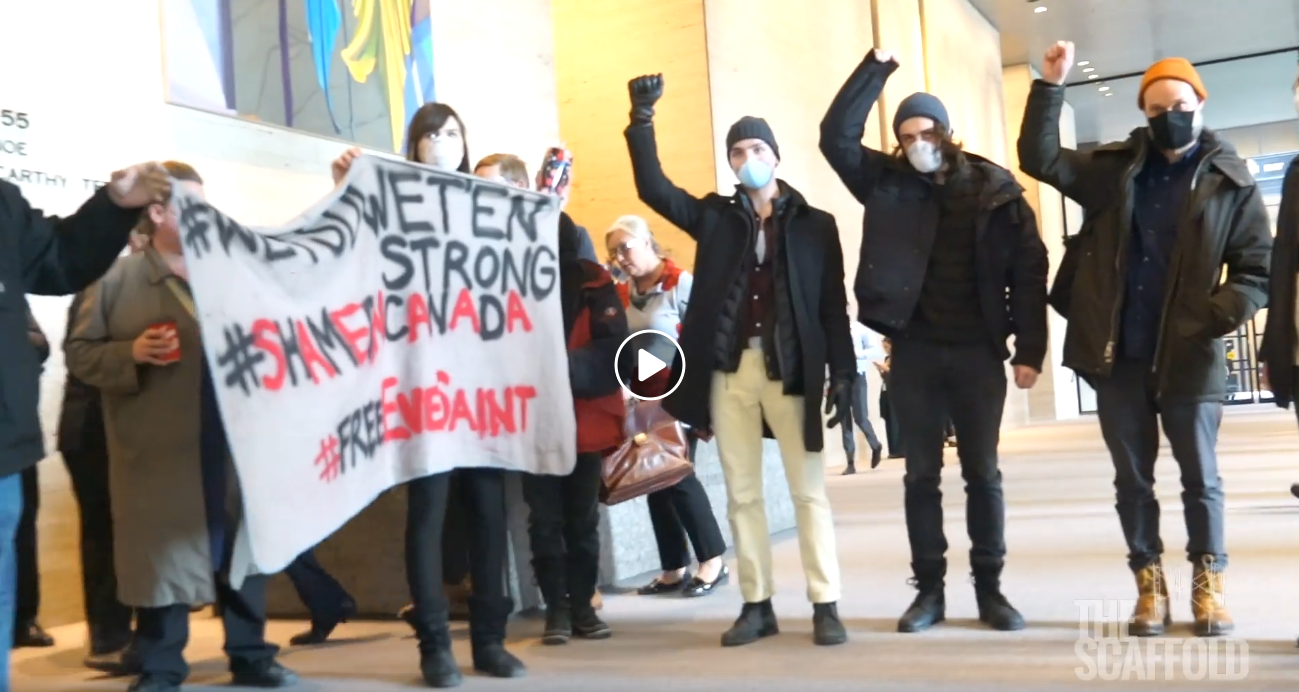 Unless you’ve been buried under a pile of snow over the last week in Canada, the chances are good that you have heard about, or been impacted by demonstrations which have gripped the country coast to coast.

The Unist'ot’en clan and their Gitdumt’en allies have been engaged in a years long confrontation with industry including mining, hydraulic fracturing, and oil sands interests in northern British Columbia.

Within the past week, a court injunction on behalf of TC Energy (formerly TransCanada Pipelines Ltd.) (Ticker:TRP) has been served and enforced by militarized RCMP units. These units brought dogs, tactical vehicles and assault rifles to evict peaceful demonstrators from a series of camps along the Morice Forest Service Road outside of Houston, BC.

TC Energy has been pushing for access to lands claimed by the Unist’ot’en. The company hopes to create a right of way for its Coastal GasLink pipeline.

For their part, Unist’ot’en occupiers claim the TC right of way presents an existential risk to traditional land use practices including ceremony, hunting, and fishing, as well as an infringement on their sovereignty over unceded land.

The escalating series of enforcement actions and raids by RCMP have prompted a coast to coast response. In Ontario, Indigenous communities and their allies have blocked rail lines, highways and Department of Justice offices in Ottawa.

Another group of protesters entered the offices of Carolyn Bennett PC MP, Minister of Crown-Indigenous relations. According to social media reports, Indigenous youth and allies remained in occupation overnight on Monday. On Tuesday that demonstration moved to the street outside of Bennet’s Yonge&Eglinton office.

Protesters targeted JP Morgan Chase & Co. because it holds TC Energy as its creditee. TC Energy currently has four loans totalling about $9.8 billion, according to activists. JPM is lead agent on more than half of TC Energy’s current credit.

Activists argued that because JPM is the primary banker of TC Energy, it has a responsibility to divest itself of environmentally and culturally impactful projects such as the planned pipeline.

Riding the elevator up to the 45th floor of a downtown Toronto skyscraper, activists sought out a decision maker in the JP Morgan office. The group eventually did speak to Dave Rawlings, senior country officer for the Canada branch (chief executive officer for Canada).

The video shows David Rawlings repeatedly challenged by activists, who point out that his company has provided finance for the TC Energy project. While Rawlings made no statements about any financial relationship between JP Morgan and TC Energy’s Coastal GasLink pipeline, a video found on the JP Morgan Youtube channel shows Rawlings bragging about his company’s role in providing ‘physical solutions’ which helped a US Natural Gas producer to get access to Canadian pipeline networks and bring their product to market.

“I would encourage you,” Rawlings said to protesters, “to look up a document called, The Statement on the Purpose of a Corporation, which was recently presented at the Business RoundTable (BRT).” This statement outlines a methodology for corporate community engagement and environmental programs, in support of shareholder profits. Rawlings suggested “these issues should be debated, there are processes to do that.”
“Indigenous people have followed your processes, and you don’t respect your own laws,” one of the demonstrators responded.

Rawlings was also told that “everyone plays a part in the oil industry, some more than others, and it is the duty of JP Morgan to recognize its own personal responsibility in this (energy infrastructure projects on unceded Unist’ot’en lands).”

Rawlings declined to discuss the pipeline project on record, insisting repeatedly that media in attendance stop filming the interaction. Protesters remarked that the filming was for their own protection. Rawlings repeatedly suggested a private, in camera meeting with protesters.

Rawlings also declined to comment when told that some of his office staff had been physically rough with female demonstrators. Activists allege that at least two male office staff, Dwane Wesley and Mondele Edmund, got immediately physical with female demonstrators, shoving and grabbing at them to impede their progress through the office. Meanwhile, uniformed facility security made it clear to demonstrators that they themselves were not authorized to use physical force to expel the protest.

The demonstrators remained peaceful throughout. “No wants this to escalate,” Rawlings said ominously to John (no last name given), an Indigenous Knowledge-Keeper who was in attendance at the demonstration. Protesters remained in occupation for about two hours before police escorted them from the building.

While the occupation of the JP Morgan Office was ongoing, RCMP at the Unist’ot’en camp arrested Freda Huson, the Unist’ot’en clan Matriarch and forcibly removed her from lands claimed by the clan. Activists, using the Twitter hashtag #ShutDownCanada have said that protests, blockades and occupations will continue throughout the week in Toronto and elsewhere.

All footage from inside the office was supplied to Warp.Media by a journalist who filmed the protest.