A Decade Old, "The Saboteur" is the Nazi-Killing Video Game the World Needs. 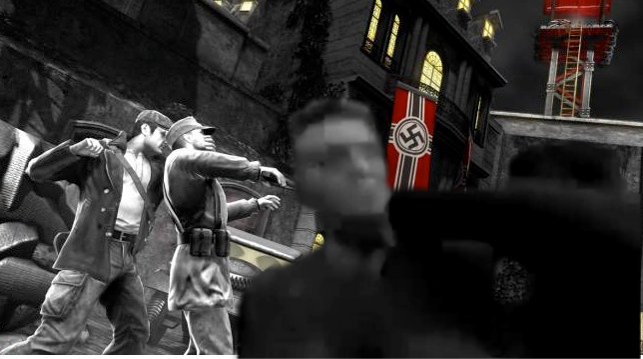 It's undeniable that since some absolute mensch cold-cocked White Nationalist Richard Spencer at Donald Trump's 2017 inauguration, social acceptance of violence towards Nazis has fully entered the zeitgeist. It's a one-sided war with plucky university students and average civilians standing up to heavily armed psychopaths, comical gladiators, far-right militia groups and the jackbooted cops who protect them.

Pretty much every facet of popular culture has been affected in some way by the unraveling social fabric. Video gaming culture in particular has become a battleground. Long the domain of misogynists and racists of all stripes, gaming culture has undergone a renaissance as major studios themselves realize there's an economic incentive to promote more inclusive content. It turns out producing products for a minority of angry white men isn't a viable business strategy. Leftist gamers too are finding shared community, united by their hatred of and opposition to the dominance of traditional gamer edgelords.

In late 2018 a new home brew 'Neo Nazi' video game was released. Promoted by Chris Cantwell (a former Richard Spencer acolyte) the game was a low-resolution side-scrolling shoot-em-up in the vein of classic Double Dragon. It boasts one of the most horrifying concepts in gaming since someone made a deliberately provocative reproduction of the Columbine massacre.

The unsurprisingly one-dimensional Nazi shooter allows players to kill LGBT activists, feminists and other minorities. It glorifies the deaths of innocents and, while it purports to do so under the aegis of artistic license, the reality is that normalizing violence and calls for violence toward identifiable group, has a demonstrable effect in increasing the probability of those calls being answered in the real world. Suggesting violence or creating a socially permissible attitude towards violence, in such a way that causes others to carry it out on your behest is a hallmark of totalitarian thinkers. It is a sociological phenomenon known as 'stochastic terrorism'.

I believe it's important to give a hat tip to the controversy about violence in video games. Some people think it has its own effect on social violence. Anecdotally, when I was attending a Christian elementary school, one of my teachers expounded to me how each of the characters I killed in a video game had families and people who cared about them just behind the scenes. She decried gaming violence as a failure of empathy on a societal level. At least part of that analysis resonated with me and, as hard as it is to imagine the family of Super Mario Goombas  mourning their lately squashed loved ones as they gather for whatever Goombas celebrate instead of Christmas, it was a view which I believe helped form my own emotional maturity regarding the moral implications of delivering swift death to collections of pixels on my screen, and the effect that might have on me in the long term.

Now, there is one type of non-player character (NPC) I've never felt guilty about killing and that's Nazis. You're not supposed to feel guilty about killing Nazis. They're goddamned Nazis. And, reflecting this, there's no shortage of games in which the player can gleefully kill Nazis. It's a tradition stretching back to titles like Wolfenstein, Medal of Honour and Brothers in Arms. Some of my most satisfying childhood memories involve tugging away at a trigger or clicking on a mouse, watching some goose-stepping, swastika emblazoned avatar get gibbed. I've blown them up, I've run them over, I've shot them, I've dropped them from heights, barbecued them with flamethrowers, gone up close and personal with a bayonet and never once, never once have I felt a twinge of remorse.

Nazis are the perfect video game 'bad guy' because, well, they're the perfect real world 'bad guy'. It turns out that service to a political and social ethos that deliberately dehumanizes others will greatly undermine most people's capacity to empathize with your suffering. I believe we call that justice.

And if any of what I just wrote makes you uncomfortable, it's possible that you might actually be a Nazi so I suggest you stop reading right now.

Gameplay trailer for The Saboteur.

By 2009, Pandemic Studios was well known for developing some of the greatest titles in gaming history including Star Wars: Battlefront, Battlefront 2, Full Spectrum Warrior: Ten Hammers, Mercenaries etc. The swan song of this giant of digital entertainment was an unassuming (and underappreciated) title called 'The Saboteur'. From a studio that did shoot-em-ups perfectly, came an open-world game in the style of Grand Theft Auto, Mafia or True Crime. Set in 1940 Paris, you take on the role of Sean Devlin, a foul-mouthed, whoring, good-for-nothing, lead-footed Irish race car driver who, through a series of unfortunate events has found his true purpose in his life: whacking Nazis.

As its name suggests, The Saboteur is essentially just a terrorism simulator. Sean roams the streets of Paris, smoking and swearing, planting explosives, assassinating Nazis, collecting contraband like condoms and chocolate which he parlays for guns and perks, which are in turn parlayed into, you guessed it, more dead Nazis! Compared to many games in the World War 2 genre with their crisp and politically uncomplicated American or British protagonists, Sean is deeply nuanced. His distaste for the Germans is rivaled by his distaste for the British who he regards as foreign occupiers of his Irish homeland. That doesn't stop the Office of Strategic Services from converting Sean into a human asset through an obvious honeypot, but we've already achieved a political and cultural depth unheard of in a lot of video games and we're barely through the introduction.

Paris 1940 is a bad place. German soldiers with swastika armbands patrol the streets. They congregate in cabarets and the red-light districts. They round up civilians, harass them, load them in trucks or just execute them where they stand. There are no civilian NPCs in the game which are visibly identifiable as Jews, Roma, LGBT+ or other folks the Nazis persecuted, but when you see a group of Nazis harassing some innocent on the street, your mind readily fills in the blanks.

There are valid criticisms that the game is clunky, short and linear while being heavy on female-in-distress tropes, portraying sex-workers as objects and emphasizing transgressive adult (though, not mature) content over meaningful character development. Basically it's Beavis And Butthead: The French Resistance. If you're on the dirtbag left you might not find a problem with this. If you subscribe to a more focused leftist political ethos which frowns on such things, I encourage you to look past the boorish "period" sexism, crude humor and bawdy jokes and enjoy The Saboteur for what it is: the best Nazi killing game around. The game's style is a dieselpunk embellishment on reality which enhances the setting without preventing the suspension of disbelief. Huge zeppelins drone overhead, genetically modified nazi super soldiers with trench-coats and skull shaped gas-masks respond to escalating alert levels (Think: Grand Theft Auto's wanted level). There's a quality stealth system which includes disguises, heavy vehicles like tanks and armored cars. Propaganda towers, prison camps and fuel depots are everywhere and destroying them is the fastest way to earn contraband and embolden the resistance.  A full blown fascist liquidating orgy of destruction and carnage is only ever one lit stick of dynamite or push of a period saloon car's accelerator away. And if you need to escape, Sean has learned the techniques of that very French urban gymnastic: parkour. After the style of Assassin's Creed, you can climb to safety-- or just to a higher vantage from which to drop grenades on Nazis.

The game is beautiful too. For something that came out a decade ago, the graphics are pretty and the settings enchanting. It's a world you can really slip into for a few hours. A beautifully realized artistic vision sees the occupied parts of Paris rendered in black and white, with the only colour being a red glow from swastika armbands and flags. As Sean liberates neighbourhoods, the pall of occupation lifts, colour returns and the civilians begin to exhibit an AI behaviour dubbed 'Will to Fight' by the game's developers.  The people rise up! Driving along, you'll start to stumble across groups of resistance fighters, who have begun purging their area of the Nazi occupiers after being inspired by Sean's "propaganda of the deed". Very few games have used this mechanic of emergent conflict properly. After awhile the map of Paris and the surrounding countryside starts to resemble the excellent Turf War mode from Grand Theft Auto: San Andreas. For hardcore players (or just masochists like me) there's a 'Feckin' Hard Mode' which dramatically increases incoming damage, reduces health recovery and outgoing damage, turning every little firefight into an almost instantaneously lethal encounter for Sean.

In 2019, we live in the shadow of the fatal Charlottesville riots, where Heather Heyer was killed while protesting against Nazis lead by Spencer and Cantwell. A game which permits (even rewards) vehicular homicide of congregated fascists has returned from ignominy to the bleeding edge of political discourse. The Saboteur was released in 2009, when the concept of killing Nazis was uncontroversial to anyone but Stormfront forum members. At the time, it won few accolades, achieved a modest metascore and was the subject of only a few positive reviews. Here I am ten years later, still writing about it, so Pandemic must have done something right. Discussions and comments in leftist gaming groups show it is fast becoming a modern cult-classic. For all of its awkwardness and immaturity, it echoes as a legendary entry in the history of gaming.

The studio which produced it was shuttered by EA months after its release and the former staff of Pandemic have mostly all moved on to contributing to other projects and companies. The closure of that studio seems to have robbed us of the opportunity to play The Saboteur 2, which would doubtless be a commercial success in the fraught political context of the rise of global fascism, hockey mascot chaos-gods, and a looming American civil breakdown.  Are you listening, EA?

For those of you who want to play the original, or who enjoy the idea of bringing fiery death to virtual Nazis before you attend your next real-life anti-Nazi rally, the game is still readily and widely available for purchase. I got my copy for $13CAD through GOG and EA's Origin store (It's currently listed at $7CAD). For people who prefer to play on console, a friend picked up a $9CAD copy in a Gamestop bargain bin. It's around, it's cheap, and it's more relevant than ever. If you're a gamer and aspiring Nazi puncher, you don't really have an excuse.

It is said that everything old is new again. There are some trends like bell-bottom pants, meat aspics or roller-skating carhop burger restaurants which I hope never make a comeback. On the other hand, this decade old video game has proven to be a sleeper classic with a newfound political relevance. I deeply hope The Saboteur comes back into vogue, if only because it helps normalize things like cabarets, jazz music and killing fascists. And no, I don't feel bad about doing that in the slightest.